Qualification and Diploma of Dental Technician (Milan 1990 and 1991).
Graduated with honours cum laude in Dentistry and Prosthodontics (Milan 1996).
Post-graduate in Implantology and Esthetic Dentistry (New York University, 2003-2005).
UTET Award winner: "The clinical case that I'll never forget" (Rimini, May 1998, 41st National Congress of the Friends of Brugg), and of the international award on occlusion at the 15th International Congress of the ICP (International College of Prosthodontists, Turin, September 2013).
Active member of the Italian society of Endodontics (Sie), the European Academy of Osseointegration (EAO), and of the Italian Academy of Microscopic Dentistry (AIOM), of which she has been part since 2015 of the Governing Council with the function of National Cultural Secretary.
Member of the reading committee of the Magazine "The Italian Journal of Endodontics", official organ of the Sie. Cultural Manager and Lombard Secretary 2011-2015 of the Sie, Lombard Section of the Sie.
Author of 55 publications in national and international journals, and various communications in national and international contexts. Co-author of several monographs and chapters of texts on perio-prosthetic and endodontic topics, the revisor of the international edition of the text "Aesthetics and Precision" by Massironi D., Pascetta R., Romeo G. (Quint. Int. Pub 2007).
Manager of the Department of CAD-CAM implants at the Italian Dental Institute of Milan (January 2012 to date), which he has been attending since 1996, lecturer at several Italian Universities.
Freelancer in Milan, fields of application, endodontics, oral surgery, implant prosthetics, cosmetic dentistry and micro-dentistry. 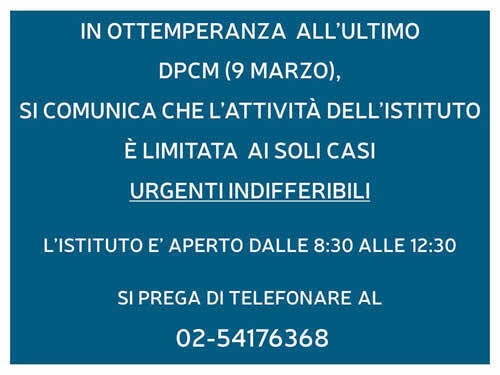